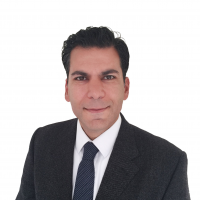 After my radiology training, I attended a year of sub-specialty Fellowship training in Musculoskeletal Radiology at McGill University in Montreal, Canada in 2007-8. I became a fellow of the Royal College of Radiologists in 2009 and started work as a consultant in the UK in 2010, initially at Glasgow Royal Infirmary then moved to Solihull to work at University Hospitals of Birmingham in 2012.

My work is mostly focused on Musculoskeletal diagnostic imaging including imaging of sports injuries and arthritis as well as MSK image guided interventions such as Image Guided Injections, Aspirations, Biopsies and Barbotage for Calcific Tendinitis. I also do a large volume of general body cross sectional imaging and general interventions such as abdominal drainages and biopsies as part of my NHS practice.