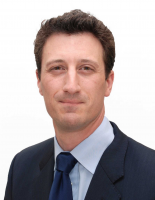 Daniel Gore graduated from Imperial College London before undertaking resident ophthalmic training in London and a one-year travelling fellowship at the University of KwaZulu-Natal in South Africa, funding awarded by the Royal Society of Medicine. He completed 3 years specialist fellowship training at Moorfields Eye Hospital in advanced corneal and laser vision correction surgery, during which time he was awarded a prestigious Quality Care Award by Health Education England.

Mr Gore spent two years as a research fellow at both the Institute of Ophthalmology and Imperial College London, during which time he investigated new laser eye surgery and cross-linking interventions for keratoconus as part of his doctorate (MD) from University College London. Building on this pioneering work, Mr Gore has lectured widely across the UK and overseas on developments in corneal cross-linking and safe laser treatments for keratoconus and other corneal ectasias. He is a respected and established authority. His position and expertise has also led him to become a respected provider of second opinions to his colleagues and peers.

Mr Gore is a founder member of the UK Cross-Linking Consortium, a Fellow of the Royal College of Ophthalmologists and member of the Association for Research in Vision and Ophthalmology and
European Society of Cataract and Refractive Surgeons.

Daniel Gore has an excellent safety record: His PCR (posterior capsular rupture) rate, the key index for safety in RLE & cataract surgery, is 0.5 %*, compared with 1.5% national average and the Royal College of Ophthalmologist's benchmark of 2.0%.

In the event of an urgent query following treatment, Bupa members should use the following contact details
020 39847859
moorfields.dgore@nhs.net