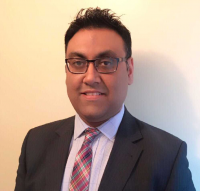 Mr Mo Shahid was born in Birmingham and qualified from St Bartholomew's and The Royal London School of Medicine and Dentistry (University of London) in 2004, where he was awarded the Wheelwrights Prize in Paediatrics.
During this time he also attended Guy’s, Kings and St Thomas’s Medical School in London and did an intercalated BSc in Anatomy. In his final year he was awarded a scholarship to participate in an exchange program at Columbia University in New York.

Mr Shahid did his basic surgical training at UCLH, The Royal National Orthopaedic Hospital and Great Ormond Street Hospital in London. During this time he obtained the MRCS exam. His higher surgical training was on the prestigious Birmingham Orthopaedic Training Programme which included the Royal Orthopaedic Hospital. He successfully passed the Fellowship of the Royal Colleges of Surgeons (FRCS) exam for Trauma and Orthopaedic Surgery on his first attempt. Shortly afterwards he was admitted to the General Medical Council Specialist Register as an Orthopaedic Specialist.

Mr Shahids fellowship training was at the prestigious arthroplasty unit in Nottingham City Hospital under the auspices of Andrew Manktelow and Peter James, where he learnt how to manage complex hip and knee problems. He also did a travelling fellowship at the Exeter Hip Unit. He then moved to Toronto, Canada to take up a place at St Michael's Hospital under the supervision of Professor James Waddell, (former president of the Canadian Orthopaedic Association), concentrating on complex problems involving the hip and knee.

He returned to the UK to take up his consultant post at Worcestershire Acute Hospitals NHS Trust. He is in the process of setting up the Worcestershire Arthroplasty meeting whereby complex cases are discussed with fellow specialists to ensure all patients receive the best possible outcomes.

He also practises at Spire South Bank Hospital in Worcester and The BMI in Droitwich.

During his training he has published a Physiology Textbook for medical students, numerous book chapters and over 20 scientific papers. Most recently he has contributed chapters to a book offering a virtual fellowship in hip surgery.

Mr Shahid has presented his work nationally and internationally and won numerous prizes. Furthermore, his research has secured grants, with the most recent being from the Royal Centre for Defence Medicine (RCDM).

Mr Shahid has been an honorary lecturer for Birmingham and Toronto Universities.

He is a surgical advisory member of Beyond Compliance which monitors the early performance of new or modified implants. It ensures that any potential problems relating to a product or its surgical use can be identified before large numbers have been implanted.

His spare time is spent with his family and he has a two-year-old daughter.