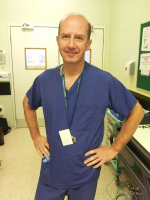 Following training in Manchester, Edinburgh and specialist centres abroad, Professor Anderson was appointed Consultant Surgeon to Salford Royal Hospital in 1995. He is a general surgeon with interests in hernia, gallbladder, colorectal and endocrine/thyroid surgery. He receives referrals for complex cases from around the North West region and beyond.

Professor Anderson is a leading surgeon in the internationally renowned Salford Intestinal Failure Unit, which is a national referral centre for complex intestinal problems following surgery. Professor Anderson’s NHS practice is at Salford Royal Hospital, one of the best and safest acute hospitals in the UK. His private practice is based at Spire Hospital, Manchester. He has an active medico-legal practice.

Throughout his consultant career he has been involved at a national and international level with new surgical developments in surgical critical care, training and standards of practice. He has been honoured to receive an MBE in 2014 for services to medical education and clinical surgery and Honorary or personal Fellowships from several surgical Royal Colleges.He is currently President of The Association of Surgeons of Great Britain and Ireland.

Professor Anderson lives in Bolton and works in Salford. His recreational interests include golf, skiing and gardening.