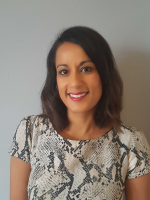 Shahzya Huda has been a Consultant in Obstetrics and Gynaecology since 2011. She qualified from the University of Glasgow in 1997 and has worked in London, Australia and completed her training in the West of Scotland Region. She has advanced training in acute and emergency gynaecology, gynaecological ultrasound and maternal medicine. She obtained a postgraduate research degree (Doctor of Medicine) from the University of Glasgow in 2010 in pre-eclampsia and has published and presented extensively both nationally and internationally.
Her current NHS practise is at Forth Valley Royal Hospital in Larbert. Her clinical expertise lies within general gynaecology with an interest in
1. Treatment and investigate pelvic pain – pelvic ultrasound, laparoscopic treatment, removal of cysts, excision or treatment of endometriosis, hysterectomy
2. Treatment and investigation of heavy or irregular bleedings – pelvic ultrasound, hysteroscopy, endometrial ablation, removal of polyps and some fibroids, hysterectomy.
3. Investigation and treatment of bleeding after menopause.
4. Pre-pregnancy counselling