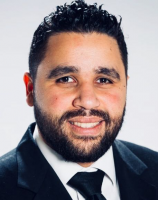 Dr Khalifa qualified with a distinction from the University College of London Medical School in 2006. Following his surgical training, he went on to undergo Clinical & Interventional Radiology training at London Northwest Hospital & Imperial College London. This was followed by dedicated Interventional Hepatobilliary, Onconology and Vascular Radiology Fellowships at Imperial College, Kings College and the Royal Free Hospital, during which time he attained the EBIR certification.

As well as general diagnostic radiology, Dr Khalifa is experienced and has expertise in both Vascular and Non Vascular intervention. He has developed particular interests in hepatobilliary intervention, management of complex vascular malformations, complex below knee revascularisation, fibroid embolization, tumour embolization & tumour ablation. He has specialist expertise in performing procedures via the transradial approach, using the small vessels in the wrist, which is less invasive and speeds patient recovery.