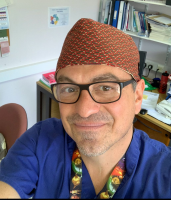 I have been practicing Paediatrics since 2002 having graduated from St Bartolomew's and the Royal London Hospitals Medical School, London in 1999.
My post-graduate was mainly in London UK including hospitals such as the Royal London, Evelina Children's Hospital and Great Ormond Street Hospital for Sick Children.

I am also a keen educator and held the post of Royal College of Paediatrics Tutor for the Trust between September 2015 and January 2019. In that time I oversaw the reform of the structure of Paediatric training and welcomed the significant improvement of its quality and reputation.

Since early February 2019 I have been appointed Training Program Director for Paediatrics in the East of England Deanery responsible for Curriculum delivery to regional paediatric trainees.

Since September 2021, I have been appointed as Clinical Director for Paediatrics for Princess Alexandra Hospital NHS Trust.