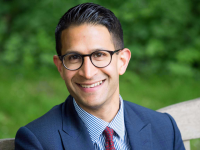 Dr Saifee is a Consultant Neurologist at The National Hospital for Neurology and Neurosurgery, Queen Square as well as at London North West Healthcare University NHS Trust. He is very approachable and has received excellent patient feedback.

He has an interest in acute neurology and manages a large acute and general neurology practice. He diagnoses and treats patients with all neurological disorders including tremor, dizziness, headaches, funny turns, blackouts, memory problems, visual symptoms, movement disorders, weakness and sensory symptoms.

Dr Saifee qualified in 2003 from UCL and was awarded a PhD at the UCL Institute of Neurology on his work in tremor and has published over 50 peer-reviewed articles in international medical and academic journals, in the field of movement disorders and Neurology. As well as general Neurology, his specific interests are in tremor, dystonia and Parkinson’s disease and other movement disorders. He is a member of the Association of British Neurologists and is a member of the specialist interest advisory group for movement disorders for the Association of British Neurologists and is also a member of the Movement Disorder Society and the American Academy of Neurology. He is the principle investigator for multiple clinical trials and is clinical audit lead fro Movement Disorders at The National Hospital for Neurology and Neurosurgery. He leads undergraduate neurology teaching at Northwick Park Hospital for Imperial College London and is director of two popular courses at UCL Queen Square Institute of Neurology.

Consultant Neurologist at The National Hospital for Neurology and Neurosurgery

GP seminar: Practical hands-on guide to the diagnosis and management of Parkinson's Disease and other movement disorders in the community.

Member of the Association of British Neurologists

Member of the Movement Disorder Society

Member of the Royal College of Physicians

Member of the American Academy of Neurology