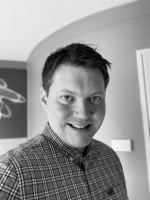 Robert Longhurst is a Consultant Optometrist with a registered independent prescribing specialty and a higher qualification in glaucoma. A former dispensing optician, he has passed both the qualifying exams set by the Association of British Dispensing Opticians and the College of Optometrists’ Scheme for Registration, leading to the FBDO and MCOptom qualifications, respectively.

Robert did post-graduate training in glaucoma at Central Middlesex Hospital and has passed masters level examinations in the same. He has passed similar examinations in advanced visual science, ocular nutrition, investigative ophthalmic science, ocular therapeutics, prescribing for disorders of the eye, retinal and macular disorders, and refractive surgery at Birmingham’s Aston University.

In June 2019, he passed the Therapeutics Common Final Assessment and gained his Diploma in Therapeutics (Independent Prescribing) from the College of Optometrists. The following month and following a further four-month period of study at Cardiff University, he gained his higher qualification in glaucoma.

He works as a Consultant Optometrist for several NHS contractors and currently sees glaucoma patients at West Berkshire Community Hospital and eye casualty patients at Royal Berkshire Hospital. He previously worked in a paediatric clinic alongside a team of orthoptists, carrying out cycloplegic refractions and indirect ophthalmoscopy.

Robert has been involved in teaching and research since his first peer-reviewed paper was published in May 2015 and has given several lectures on dyslexia and the spontaneous Pulfrich effect, including an invited lecture at Oxford University. He is currently a doctoral candidate at Aston University.

Robert is a Freeman of the City of London and was admitted as a Liveryman of the Worshipful Company of Spectacle Makers in April 2017.

Liveryman of the Worshipful Company of Spectacle Makers