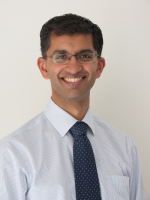 Mr Alexander is a Consultant Ophthalmologist with particular expertise in cataract and vitreoretinal surgery.

Mr Alexander graduated from the University of London in 2002 with Double Distinction and a number of academic prizes. He gained comprehensive training in all aspects of Ophthalmology, and has completed advanced subspecialist surgical training in Nottingham, Southampton and at Moorfields Eye Hospital, London. He is currently a Consultant Ophthalmic and Vitreoretinal Surgeon at Cambridge University Hospitals, and is co-director of the Stickler Syndrome Diagnostic Service commissioned by NHS England.

He has over 45 publications in the scientific literature, and in 2013 was awarded funding from the Global Ophthalmology Awards Programme (GOAP) to conduct research into ocular stem cell transplantation, for which he later received a doctorate. He has presented his work at national and international meetings, and at the Houses of Parliament.

Mr Alexander’s MBA thesis focussed on healthcare innovation for patients with diabetic eye disease.
In 2016, Mr Alexander was invited to attend the Ophthalmology Honours ceremony at the Royal College of Surgeons, where the Stickler Syndrome Service at Cambridge University Hospitals was given the Judge’s Special Award in recognition of the “highly specialised” and “world class” service that it delivers.

Conditions treated by Mr Alexander include: