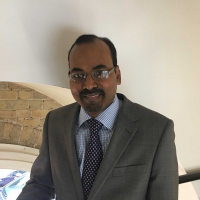 He completed his basic medical training and was awarded his MRCP degree in medicine from the Royal College of Physicians, Edinburgh in 2003. He subsequently has undergone comprehensive specialist training in the field of Gastroenterology and Hepatology in London and is on the specialist register since 2013.

During his training period, he was also involved in research and worked at the prestigious Institute of Liver Studies, Kings College Hospital, London; one of the largest Liver Transplant centres in the country. He researched on the topic of Acute liver failure and Viral hepatitis and has published in peer-reviewed journals. He completed his research dissertation and has been awarded a Masters Degree in Hepatology from Kings College, London.

After completing his specialist training, he dedicated a substantial period undergoing super speciality training in Hepato-pancreaticobiliary medicine. He completed a two-year Fellowship program in endoscopy at Kings College Hospital, London.

He has a broad range of interest in endoscopy. He performs both diagnostic and therapeutic gastroscopy and colonoscopy; including Botox injection, dilatation/ stenting of the oesophagus and colon, polyp removal and managing acute gastrointestinal bleeding. He also has a particular interest in Hepato-pancreaticobiliary endoscopic procedures. He performs both Endoscopic Retrograde Cholangiopancreatography (ERCP) and Endoscopic Ultrasound (EUS) for both cancer and non-cancerous conditions, including bile duct stones, cysts and strictures.

He believes in a patient-focussed approach and involves them in the decision-making process to achieve the best outcome during treatment of their various ailments arising from the gastrointestinal tract.

His specialist interest is in interventional endoscopy (stenting/dilatation/polypectomy/ fine needle aspiration biopsy) and undertakes procedures such as Gastroscopy, Colonoscopy, ERCP, EUS and Fibroscan. His clinical interest is in the early detection and management of both acute and chronic medical conditions arising from the liver, oesophagus, stomach and the bowel.