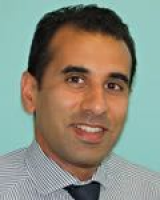 Dr Sajir Mohamedbhai graduated from the University of Cambridge in 2002 . He completed his specialization in Haematology in 2010 and is a Fellow of the Royal College of Pathologists. In 2014, he was appointed as substantive Consultant Haematologist at North Middlesex Hospital, with a joint appointment at University College London Hospital(UCLH). He is Clinical Lead for Haematology at North Middlesex Hospital. He treats patients with a range of haematological malignancies and general haematology problems. At UCLH he is part of a large, internationally recognised Lymphoma team