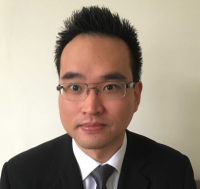 Mr Alvin Chen is a Consultant Orthopaedic Surgeon specialising in hip and knee surgery. He treats a wide range of conditions in the hip and knee, including sports injuries, arthritis and trauma. His NHS base is at King’s College Hospital, one of the busiest hospitals in London, where he manages patients with complex lower limb trauma injuries, as well as routine elective hip and knee surgery.

Following his National Service in Singapore, where he finished as a Lieutenant, Alvin attended and graduated from King’s College Medical School in 1999. He also completed a BSc in Neuroscience with honours at University College London, where he undertook research into nerve disorders and conditions. Alvin has also completed a degree in law (LLB) from Queen Mary and Westfield College in London.
He then gained a broad training in aspects of accident & emergency medicine, orthopaedic, general and neurosurgery through hospitals in NW Thames and finally, the Royal National Hospital for Neurology and Neurosurgery at Queen’s Square. During his training, Alvin obtained both the Membership of the Royal College of Surgeons of England, passed the Bar Vocational Course (BVC and member of Lincoln’s Inn), as well as completing a further MSc from Imperial College in Surgical Technology, all the while continuing his training as an Orthopaedic Surgeon.

Alvin obtained a place on the North West Thames Orthopaedic Training programme in 2006 and was awarded the Fellowship of the Royal College of Surgeons in Edinburgh in 2011. He also undertook further fellowship training in hip and knee surgery at both the Royal National Orthopaedic Hospital (RNOH) at Stanmore, and High Wycombe.

Prior to completing his orthopaedic training, Alvin pursued a Doctorate-level degree in Orthopaedic Research at the prestigious Imperial College London and was awarded a Doctor in Medicine (Research) in 2016 by the College.

He joined the specialist register for trauma and orthopaedics in 2013 and was subsequently appointed as a Consultant Orthopaedic Surgeon at King’s College Hospital in 2014.

Alvin has an interest in orthopaedic research, with over 35 podium and poster publications, including papers in peer reviewed journals, both as part of, and separate to his work on his Doctorate. He is published in areas such as medical litigation, cost analysis of knee replacements and also orthopaedic education. He has retained a strong interest in orthopaedic education, and is a Course Director for the well regarded Bi-annual King’s College FRCS Revision course, as well as contributing to the simulation, trauma and IM nailing courses run at King’s. In addition, he is the Local Educational Faculty Lead for the Orthopaedic Department of King’s College Hospital.

Because of his legal background, Alvin also has an extensive interest in medicolegal work. He routinely represents his department at King’s College Hospital in litigation-related issues or analysis.and does over 250 medicolegal reports per year ranging from simple cases to complex poly-trauma patients.