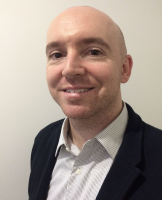 Gareth graduated from the University of Western Sydney in 2003 with a degree in applied science specialising in Podiatry. Since then he has had the privilege of working in Sydney, Dublin and London. During his time in Sydney, Gareth consulted for the Royal Australian Naval College.

Gareth has a specialist interest in running and sport related biomechanics that lead to symptoms such as heel pain, Achilles tendon pain and shin pain.

He produces the highest quality orthotics and shoe supports whilst striving to improve foot and leg mechanics. During his time in Sydney, Gareth consulted for the Royal Australian Naval College.
Since arriving in London in 2009, Gareth has primarily worked within multi-disciplinary clinics as a sports podiatrist, working closely with physiotherapists, osteopaths, orthopaedic surgeons, sports massage therapists, radiologists and GPs. Gareth is a firm believer in a holistic approach to the management of lower limb related injury/pathology and understands the importance of addressing the factors that led to the development of the injury in order to prevent its reoccurrence.

Gareth has a keen interest in a wide range of sports and has a background in cricket and football. In his spare time he enjoys cycling, squash and golf.

HCPC
Society of Chiropodists and Podiatrists