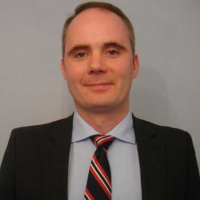 Professor Jamie Murphy completed his medical school training at the University of St. Andrews, Harvard University and St. John’s College, Cambridge. After qualification, he undertook his Higher General Surgical Training at the Royal London Hospital and was awarded a PhD in Colorectal Molecular Oncology.

Professor Murphy’s specialist clinical and academic interests centre upon the treatment of bowel cancers that require advanced therapies due to their extent or complexity. As such, he has been responsible for the establishment of both an advanced / recurrent pelvic cancer service, in addition to a heated intraperitoneal chemotherapy (HIPEC) service for recurrent bowel cancer, at Imperial College and at Cleveland Clinic London. Professor Murphy is also investigating the use of high intensity focused ultrasound (HIFU) as a therapy for bowel cancer patients who have tumours that cannot be treated by conventional means.

Professor Murphy has contributed to numerous surgical textbooks and published extensively in surgical journals. In addition, he has lectured worldwide on the subjects of advanced minimally invasive colorectal surgery and complex cancer, particularly in the USA where he has served as a faculty member for many of the American national surgical conferences.