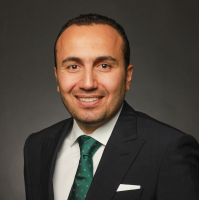 Dr Mohamed Abdelghani is one of the pioneers of introducing Transcranial Magnetic Stimulation (TMS) in UK clinical practice.

In 2016 he founded the first clinical TMS in the NHS in London and South England at Camden and Islington NHS Foundation Trust and he continues to lead this service until the present time. In 2017 he became the first British doctor to be elected as a director of the Clinical TMS Society and he was re-elected to this position in 2020. The Clinical TMS Society is the largest professional organisation of TMS clinicians in the world. In 2019 he became the first person from outside North America to be elected to the Executive Committee of the Clinical TMS Society when he was elected as Secretary of the Society. In May 2018 he was awarded the Clinical TMS Society President’s award for his dedication, collaboration, efforts and leadership to advance the ideals of the Society. At the present time he is the chair of the Outreach Committee in the society in addition to being a member of the Educational Committee. He gives lectures and hands-on-training both nationally and internationally on the topic of TMS and neuromodulation. He is a faculty member of the PULSES TMS training course that is delivered by the Clinical TMS Society in different countries.
He has been formally trained in TMS at two of the top TMS centres in the world; Harvard University in USA and Medical University of South Caroline at the hands of Prof Mark George who was the first psychiatrist to use TMS to treat depression in the early 90s.
Dr Abdelghani is actively involved in TMS clinical research with the aim of making TMS treatment more efficient and more accessible to different groups of patients. He is the London Principal Investigator for the BRIGhTMIND TMS Randomised Control Trial.

Dr Abdelghani has been working as a Consultant Psychiatrist in the NHS for more than 7 years. He has been a consultant psychiatrist at Camden & Islington NHS Foundation Trust in Central London since 2014. Besides his TMS work Dr Abdelghani is also the Lead Consultant Psychiatrist for the Adult ADHD Service at Camden and Islington NHS Foundation Trust and he is one of the consultants at the Complex Depression, Anxiety and Trauma (CDAT) service in the same Trust. He holds two clinical excellence awards from the Trust for his work on improving NHS services and providing high quality care.

Dr Abdelghani completed his post-graduate psychiatric training at South London & Maudsley NHS Foundation Trust (SLaM) which is the biggest mental health trust in the UK, a centre of excellence and one of the most influential mental health organizations in the world. During his training at SLaM he worked alongside some of the most prominent professors and clinicians in the field. Dr Abdelghani worked at the National Affective Disorders Service, which was one of six national affective disorders units in the UK. After working in the National Affective Disorders service for a year he became involved in a multicentre international cutting-edge research that tested the use of Deep Brain Stimulation (DBS) to treat treatment resistant depression. He was the primary psychiatrist at King’s College London site for this study.

In 2009 he became a member of the Royal College of Psychiatrists and in 2020 he was elected as a fellow of the college as a recognition of his contribution to the field of psychiatry. In 2012 Dr Abdelghani obtained MSc in Clinical Neuroscience from King’s College London. After finishing his higher psychiatry training at SLaM he worked as a consultant psychiatrist for almost a year at the same organization before taking on his current post a Camden & Islington NHS Foundation Trust with the aim of developing special depression and adult ADHD services.

Dr Abdelghani established his private practice Dyad Medical in Harley Street in 2015 and over the last few years he became one of the most well-known private psychiatrists in London.