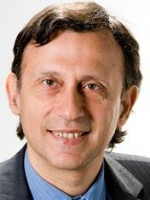 He trained as an undergraduate at Charing Cross Hospital Medical School, London, qualifying in 1980. He then trained in the specialty of Obstetrics and Gynaecology at St Bartholomew’s and King’s College, London, and later at the John Radcliffe Hospital, Oxford. He trained in Fetal Medicine at the Harris Birthright Centre in London and in Oxford.

At the Royal Free Hospital he set up the Fetal Medicine Unit, Early Pregnancy Unit and Recurrent Miscarriage Clinic. For five years he held a senior management position at the Royal Free Hospital, London, as Clinical Director of the Department of Obstetrics and Gynaecology. He is an examiner of the University of London for the MBBS degree and an examiner for the Advanced Diploma in Obstetric Ultrasound for the Royal College of Obstetricians and Gynaecologists (RCOG). He is a Fellow of the Royal College of Obstetricians and Gynaecologists, and holds a Doctorate of Medicine of the University of London. He is a member of the British Maternal Fetal Medicine Society, and the International Society of Ultrasound in Obstetrics.

He is actively involved in the training of obstetricians and gynaecologists at all levels.