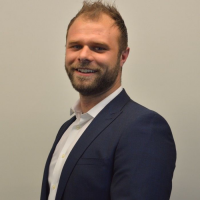 Michael Qualified from Southampton University with a Podiatry degree in 2006. After qualifying Michael was offered a prestigious position in the local NHS in Southampton where he gained experience in all aspects of podiatry and went on to be the lead clinician in the ‘At risk Foot team’ helping prevent mainly diabetic patients from having amputations associated with the complications that diabetes can bring.

In 2008 Michael then left the NHS to go and work for the one of the worlds leading and UKs largest orthotic manufacturer. Where he was the lead podiatrist for nearly 5 years. In his role there he helped to develop products and an educational programme, which he delivered to thousands of UK and healthcare professionals. Michael has also delivered this educational programme internationally from Portugal to Saudi Arabia. Michael also carried out a number of clinics at some of the UKs largest employers such as BAE systems and coca cola.

At the start of 2013 Michael left LBG Medical and started working in Full time private practice in a number of clinics across London treating a wide range of lower limb and podiatric conditions. His main focus is on human movement and analysing people gait concentrating on musculoskeletal conditions.

Michael is an active sportsman having played basketball in the national leagues and high-level rugby. He is a keen cyclist having completed john O’Groats to lands end raising money for the JDRF (juvenile Diabetes Research Foundation).

Society of Chiropodists and Podiatrists
HCPC