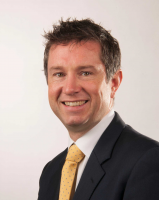 Mr Nigel Hall is a Consultant Paediatric and Neonatal Surgeon who practices at The Spire Hospital, Southampton and The Candover Clinic in Basingstoke. His NHS practice is based at Southampton Children’s Hospital and he is also Associate Professor of Paediatric Surgery at the University of Southampton.

Mr Hall trained in General and Specialist Paediatric Surgery at Southampton Children’s Hospital, Great Ormond Street Hospital, London and at the Hospital for Sick Children, Toronto, Canada. During his training he was also Research Fellow at University College London and received his doctorate from the University of London.

Mr Hall leads an active research program in children's surgical conditions. He is on the editorial board of the journal Paediatric Surgery International. At the Hampshire clinic, Mr Hall offers out-patient and in-patient care for all general paediatric surgical conditions including skin lesions, inguinal (groin) hernia, hydrocele, umbilical hernia, undescended testis, circumcision and tongue tie (frenuloplasty) in both babies and children

The majority of procedures are performed as day case surgery. Mr Hall exclusively treats children under the age of 16 years. Consultations are child-centred, friendly and arranged to suit parents and child.