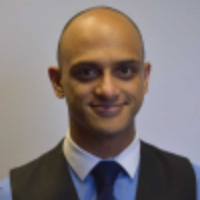 I was raised in Leicester and was delighted to return to my roots after being appointed as a Consultant Cardiologist and Electrophysiologist at the Glenfield Hospital in Leicester in 2014. I am married with two children who take up most of my spare time. When time allows, my other interests include foreign travel, football and music.

I have trained in cardiology since 2002 and was appointed as a Consultant Cardiologist at the Glenfield Hospital, Leicester, in December 2014. I was also awarded a PhD from the University of Leeds in 2011 after a period of dedicated research in the field of cardiology. I have received extensive training in both general cardiology and cardiac electrophysiology at the Yorkshire Heart Centre in Leeds as well as at Queen's University, Kingston, Ontario, Canada having successfully completed a two year fellowship (Diploma). I have been appointed as Head of Cardiac Electrophysiology at the Glenfield Hospital.

I also implanted the UKs first Micra AV leadlesss pacemaker and am able to offer this technology to patients at Spire.