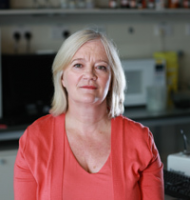 Dr Alison Jones graduated from Bristol University in 1980 and after general medical experience she specialised in Medical Oncology, training at the Royal Marsden Hospital where she also undertook a higher degree in Biological Therapy of Cancer for an MD thesis in 1993.

She took up an NHS consultant post in Medical Oncology with Honorary Senior Lecturer status at the Royal Free Hospital in 1993, initially treating a wide range of tumours but subsequently specialising in breast cancer working both at the Royal Free Hospital and University College Hospital, London. She has worked privately in conjunction with her NHS practice for many years and for the last three years has worked in the private sector only, in the context of HCA, mainly at LOC in Harley Street.

During her clinical career she has been active in clinical trials, education, service development and guidelines. She has been chair of her professional society (The Association of Cancer Physicians) for five years and has advised the London Cancer New Drugs Group on introduction of new drugs. She is also a past Vice Chair of CTAAC (Clinical Trials Awards and Advisory Committee) for CRUK. She remains a member of the British Breast Group, ESMO and ASCO.

Interest in holistic management of side-effects of treatment, including aspects of fertility, pregnancy, menopausal symptoms and bone health.

Works in context of multidisciplinary team with breast care nurse support for patients.