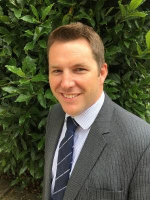 Mr Lippiatt is a consultant Gynaecologist and Gynaecological Oncologist. He completed the general training programme in Obstetrics & Gynaecology and then did a further two years subspecialising in gynaecological cancer. His training was largely at the University Hospital of Wales, Cardiff; during which time he was also appointed as a clinical lecturer for Cardiff University and obtained a Doctorate of Medicine for his research into HPV and cervical disease. Mr Lippiatt was the first British subspecialty trainee to undergo a robotic surgery training fellowship in the UK. In his first year as a consultant at Poole Hospital, Mr Lippiatt set up an advanced laparoscopy service to treat endometrial and cervical cancer. This has meant less pain, quicker recovery and far shorter length of stay in hospital. This has improved even further with the introduction of a robotic surgery service to the women of Dorset and the surrounding area. Mr Lippiatt now routinely treats endometrial and cervical cancer patients using the very latest state of the art surgical robot. He is a founding member and chair of the robotic implementation group at Poole hospital. He is also on the council of the British and Irish Association of Robotic Gynaecologists and a member of the Society of European Robotic Gynaecological Surgery. Mr Lippiatt is involved in several research projects including being Principal Investigator for a large surgical trial for endometrial cancer. He is an Associate Professor at St Georges Medical School, Grenada and regularly has students from Grenada as well as Southampton and King’s medical schools.

All aspects of gynaecology/gynaecological oncology