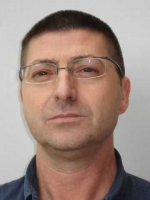 Valerio Di Nicola MD, PhD, FRCS, was born in Rome and graduated in Medicine in 1989. From 1989 until 1997 he worked at Policlinico Umberto I in Rome first as Resident during his General Surgery Specialization and then, during his PhD in Microsurgery and Regenerative Medicine he worked as Researcher.
In the next years, he improved his skills in Laparoscopic and Minimally Invasive procedures ( Fellowship of ACOI- Italian Surgeons Association-) and increased his knowledge in Colorectal surgery with a Fellowship in ‘Minimally Invasive and Open Surgery in Colorectal Cancer’.
Later he achieved a Master in Coloproctology at the University ‘La Sapienza’of Rome.
From 2006 to January 2010 he was Leader Consultant of the General Surgery Department at San Marco Hospital in Latina, Italy.
From February 2010 he was Consultant in General and Colorectal Surgery at the Israelite Hospital of Rome.
From November 2010 to June 2013 he had worked as Consultant in General, Emergency and Trauma Surgery at the Aurelia Hospital in Rome (DEA I) .
On May 2013, he was appointed Scientific Director of the Interbion Foundation for Basic Biomedical Research. Montedato, CH-6595 Riazzino, Switzerland (www.interbion.ch).
From July 2013 to October 2017 he worked at Noble’s Hospital- Isle of Man (UK), in the General Surgery Department, as Consultant in General and Colorectal Surgery. A core member of the Colorectal and Upper-GI MDTs. Since June 2015 he was the leader of the Surgical Educational programme, managing the Surgical Teaching meetings and the Mortality & Morbidity meetings. On December 2015 he was appointed at Noble’s Hospital, Leader of the Paediatric Surgery.