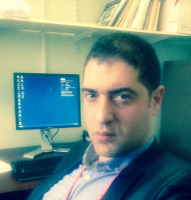 Lampros Liasis is a consultant general, emergency and laparoscopic surgeon at Northwick Park Hospital, Harrow and Central Middlesex Hospital.
Mr Liasis's practice covers all aspects of general gastrointestinal and abdominal wall surgery as well as common and complex general surgical emergencies. His main areas of interest include laparoscopic surgery of complex or complicated benign gastrointestinal diseases.
Having graduated from Medical School of Athens University (Greece) in 2003, he trained in one of the busiest hospitals and Major Trauma Centres in Athens, Greece, where he exposed and trained to the majority of the elective and emergency gastrointestinal tract surgical diseases, as well as he gained unique experience treating patients suffering major trauma. In 2011 he moved to Texas, USA where he undertook a fellowship in the novel technique of Single Port Access Laparoscopic Colorectal Surgery. Prior to his current consultant appointment at Northwick Park Hospital, Mr Liasis worked as International Fellow at St Marks’s Hospital, Harrow and he also completed a post CCT fellow in Major Trauma and Emergency Surgery at Kings College Hospital.

Research and Teaching Interests
Mr Liasis had his PhD from the University of Athens with merits. He demonstrates high academic and teaching interest. He is an Honorary Clinical Senior Lecturer of the Imperial College and he currently teaches in a weekly basis Undergraduates and Postgraduates students (Imperial College 3rd and 5th year, Researcher fellows and Clinical Academic Fellows). He is currently educational and clinical supervisor of the surgical trainees. He is a fellow of the American College of Surgeon (FACS), the Royal College of Surgeons (FRCS) and he serves as a faculty member of the CCrISP course, examiner of the Imperial College School of Medicine final year exams and examiner on the laparoscopic simulator for the Core Surgical Trainee SITE exams. He has Clinical Lead role on the Core Trainees National Recruitment Process and he is also panellist member of the National Recruitment Process for the High Surgical Training. He is also Principal Investigator and Clinical Lead at Northwest London Hospitals NHS Trust for the National Complicated Diverticulitis Audit (CADS), the National Emergency Laparotomy Audit (NELA) and the National Enhanced Peri – Operative Care for High risk patients (EPOCH) clinical trial.

Clinical Based Research on the quality of Emergency Surgical Patients.