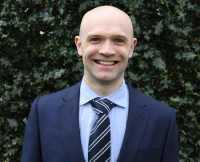 Mr Curtis Robb is a Consultant Orthopaedic Knee Surgeon, specialising in all aspects of knee surgery.
He graduated from the University of Sheffield in 1997 combining his medical studies with a career as an Olympic Athlete competing in the 800m at two Olympic Games, three World Championships and a Commonwealth Games.

His orthopaedic training appointments have included The Queen Elizabeth Hospital Birmingham, the Royal Centre for Defence Medicine and The Royal Orthopaedic Hospital Birmingham, where he was also Honorary Clinical Lecturer. He then embarked on three Knee Surgery and Sports Injury Fellowships at Bristol, Coventry and Sydney, Australia. In 2015 he was awarded the European Knee Society for Sports Traumatology, Knee Surgery and Arthroscopy (ESSKA) Alwin Jager Senior Fellowship in Munich.

He has presented on knee surgery nationally and internationally and published several papers on the knee in peer-reviewed literature. He has a particular interest and experience in managing sports injuries of both amateur and professional athletes.

He specialises in all treatments of the knee. He offers both non-surgical and surgical management options for all knee conditions.