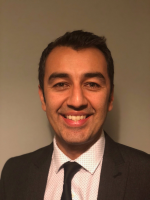 Mr Tamim Siddiqui is an experienced Consultant Vascular, Endovascular and Endovenous surgeon currently working at the private practice of Nuffield Health Glasgow Hospital. He is the Clinical Lead for Vascular Surgery for The South West Scotland Vascular Network covering an NHS population of 1.2 million and has a number of management and leadership roles including Specialty Advisory to The Chief Medical Officer in Scotland and Deputy Clinical Director for Surgery and Associated Specialties. Mr Siddiqui has published widely and is involved in research and training. He is the Deputy Training Programme Director for Vascular Surgical Training in Scotland.

Mr Siddiqui specialises in minimally invasive varicose veins procedures. These include treatments such as Radiofrequency Ablation, Ultrasound Guided Foam Sclerotherapy and Venaseal. As a specialist in these techniques, Mr Siddiqui provides surgeons across Scotland with the training that they need to carry out these procedures. He also performs the full range of vascular surgery treatments including angioplasty/stenting, aneurysm repair, carotid surgery and management of peripheral arterial disease and diabetic vascular disease.

Mr Siddiqui studied medicine at the University of Edinburgh, earning his Bachelor of Medicine and Surgery (MBChB) in 2001. After completing his specialist training in the West of Scotland, he joined Raigmore Hospital as a Consultant Vascular Surgeon in 2013. During this time, he was responsible for introducing cutting edge minimally invasive varicose veins treatments to NHS Highland. Mr Siddiqui then took on the role of Consultant Vascular, Endovascular and Endovenous Surgeon at University Hospital Hairmyres in 2017, leading a modern high-quality vascular service while undertaking full clinical commitments.

Mr Siddiqui is married with a young family and is an experienced surgeon with a friendly and compassionate manner with a passion for patient-centred care.

Mr Siddiqui has an interest in training and education and is a member of the Joint Committee of Surgical Training Specialty Advisory Committee for Vascular surgery and a Specialty Trainee Educational Supervisor.