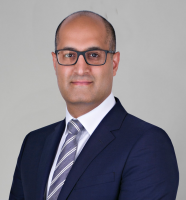 Mr Zameer Shah is a leading Consultant Orthopaedic Surgeon specialising in hip and knee surgery. He treats a wide range of conditions in the hip and knee, including sports injuries, arthritis and trauma.

His NHS base is at Guy’s and St. Thomas’ Hospitals, London two of the best hospitals in the world, where he manages patients with complex conditions referred to him from across the country, as well as routine elective hip and knee surgery.

He is committed to excellence and has some of the best patient outcomes and feedback as reported independently on sites such as www.iwantgreatcare.org.

Mr Shah attended and graduated from Kings College London. Following House Jobs in London he was selected as an Anatomy demonstrator at the University of Manchester where he was instrumental in deployment of the new medical curriculum.

He was a Research Fellow at the Royal National Orthopaedic Hospital (RNOH) in Stanmore undertaking pioneering work in the use of Stem Cells. After completing his Orthopaedic Training in the UK he is one of the few UK Fellows selected as the International Fellow at the prestigious Insall Scott Kelly Institute and the world famous Hospital for Special Surgery in New York, USA.

During his clinical training Mr Shah completed a MBA at Imperial College London and a Diploma in Sports Medicine from the Royal College of Surgeons. His work there focused on measuring and improving healthcare performance and quality. He remains on of a few surgeons in the country with such a qualification and is a Non-Executive Director for several companies and regular consults for other Healthcare Companies.

He was appointed Consultant Orthopaedic Surgeon to Guy’s and St. Thomas’ Hospitals in 2012. He has been recognised as one of the Next Generation Capital Leaders by the London Leadership Academy. Mr. Shah has led the development of the Enhanced Recovery Programme at Guy’s, which has won national recognition. He is currently developing the Patient Outcome reporting so to fully correlate treatments with outcomes. He has published widely with 50 podium and poster publications, as well as papers in peer reviewed journals.

In January 2021 he was elected and appointed Head of Department of Orthopaedics at Guys and St. Thomas’ Hospitals, one of the largest and oldest departments in the UK.

Mr Shah is passionate about uncovering new advances and is involved in national trials and programmes. He is Clinical Lead with the Royal College of Surgeons of England to advance surgical practice globally through the International Surgical Training Programme. He is a Senior Clinical Lecturer at Kings College London and has an active role in teaching and lecturing including the development of new innovative courses.

Outside work Mr Shah enjoys numerous sports but in particular football. He also enjoys travelling and discovering new journeys, reading history and is currently learning to play the piano. Mr Shah lives with his family in London.

He is a member of several National and International Organisations such as the British Hip Society, British Orthopaedic Association, British Association for Surgery of the Knee, European Hip Society and the American Academy of Orthopaedic Surgeons.

In case of emergency
Please contact local A&E or GP