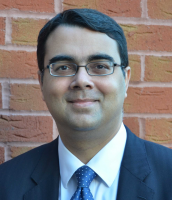 Dr Uppal completed his undergraduate medical training in 1995 and subsequently worked in Primary Care and General Medicine before specialising in Psychiatry. He did his basic and specialist training locally in Gloucestershire in the Severn Deanery. He is on the GMC Specialist Register with accreditation in General Adult Psychiatry and an endorsement in Rehabilitation Psychiatry.

During his training Dr Uppal had the opportunity to work under the supervision of Professor David Nutt in the Psychopharmacology Unit in BRI, Bristol and Dr Jonathan Bird in the Neuropsychiatry Unit in the Burden Centre, Frenchay Hospital, Bristol. He has also done the Foundation Course in Cognitive Behaviour Therapy Skills from the Oxford Cognitive Therapy Centre.

Dr Uppal is experienced in the assessment and management of both common mental disorders and serious mental illnesses. His first appointment as Consultant was with the Cheltenham Crisis and Home Treatment Team from January 2010 to July 2013 where he managed patients with both common and severe mental disorders in the community as well as in the hospital. In August 2013 he was appointed as Consultant to the Gloucester Assertive Outreach Team managing patients with severe and enduring mental disorders.
Dr Uppal has a keen interest in medical education and management. He has served as Postgraduate Tutor (November 2010 – August 2013), Director of Medical Education (August 2013 – November 2017) and took over as Medical Director in 2gether NHS Foundation Trust on 1st December 2017.

Dr Uppal is a Member of the Royal College of Psychiatrists.