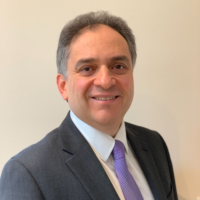 Mr Trompetas studied medicine in Athens where he subsequently trained in General Surgery in big, busy hospitals. He moved to the UK in 2004 where he received further training at London University Hospitals (St George’s Hospital and Mayday) and at Eastbourne District General Hospital and Conquest Hospital. He became a consultant in Eastbourne in 2010.
He moved to Southampton in 2013 when he was appointed Consultant Acute General Surgeon at University Hospital Southampton. Together with his colleagues, he has developed the delivery of a first class service in acute general surgery for the population of Southampton and large part of south Hampshire.