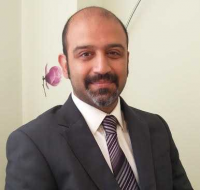 Qamar Ghafoor qualified from the University of Birmingham in 2002. He trained within the West Midlands and was appointed as a Consultant Clinical Oncologist in 2011. He is the Oncology Service Lead at University Hospital Birmingham.

Qamar specialises in the treatment of lung, mesothelioma and skin cancers with chemotherapy, immunotherapy, targeted agents and radiotherapy.

He is the principal investigator for a number of national clinical trials, and has published papers in peer reviewed journals, in addition to presenting at International conferences. He has developed 4-Dimensional and Stereotactic lung radiotherapy within Birmingham, and has expertise in delivering Cyberknife treatment to lung tumours.

He led the development and initiation of the West Midlands Mesothelioma MDT, and is an Honorary Lecturer at the University of Birmingham

Lung cancer - including systemic agents, and state of the art radiotherapy