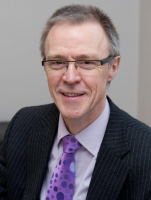 Consultant Medical Oncologist who specialises in providing high quality cancer diagnosis, medical treatment, and follow-up for women (and men) with breast cancer. I have a long professional clinical and research career in diagnosis and treatment for patients with gynaecological cancer, however I am no longer taking referrals for ovarian, uterine or cervical cancer.

Modern treatment for cancer requires the careful integration of diagnostic procedures, surgical treatment, medical therapies with chemotherapy, targeted molecular therapies, endocrine therapy, and radiotherapy. This is brought about through a multidisciplinary team approach where pathologists, radiologists, oncologists, surgeons, and specialist nurses meet on a regular basis to consider the diagnosis and optimal treatment for individual patients.

Professor Perren is a member of the multidisciplinary team for breast cancer at the Leeds Cancer Centre which is based at the St James’s Institute of Oncology within the Leeds Teaching Hospitals NHS Trust. Professor Perren works with the same team of surgeons, radiologists, and pathologists in the private sector as he does in the NHS.

Modern cancer treatment is increasingly becoming tailored to the individual patient and their particular cancer through careful analysis of the nature and extent of the disease together with information regarding certain biological and molecular features exhibited by the cancer. So one patient with, say breast cancer, will not necessarily need to have the same treatment as another patient who apparently has the same disease. Professor Perren uses molecular analysis of the individual tumour of patients where appropriate to guide treatment using technologies such as Oncotype DX or Molecular Profiling from organisations such as Caris, Myriad and OncoDNA.

Oncologists are involved at all stages in the pathway of care, and today, where appropriate, chemotherapy or hormonal therapy maybe used as the initial form of treatment, sometimes referred to as neo-adjuvant therapy.

Professor Perren has many years of expertise in chemotherapy and hormonal therapy for breast cancer (in men as well as in women) and the whole range of gynaecological cancers. The gynaecological cancers include, ovarian cancer; primary peritoneal cancer – a condition which is often confused with ovarian cancer; ovarian germ cell tumours (often known as ovarian teratomas or yolk sac tumours); fallopian tube cancer; endometrial cancer (cancer of the lining of the womb); cervix or cervical cancer, vaginal cancer; vulval cancer. There are a number of rarer gynaecological malignancies such as carcinosarcomas (sometimes known as mixed mullerian tumour), or various other forms of sarcoma which can affect either the ovary or the endometrium. Professor Perren is however no longer taking referrals for gynaecological cancers.

Professor Perren has expertise in treating patients with both newly diagnosed early cancer, and cancer which has recurred after previous treatments. On occasions patients are diagnosed with advanced cancer and it is not clear which organ the cancer has developed from; this is known as cancer of unknown primary site. Professor Perren, with his colleagues in diagnostic radiology and pathology, are very familiar with the appropriate investigation of this form of cancer so that optimal treatments may be offered.

More than 100 publications in the medical literature, summarised on Research Gate:
http://www.researchgate.net/profile/Timothy_Perren