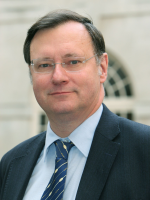 Having qualified from the University of Liverpool and undertaken junior doctor posts in Preston, I trained in radiology on the Merseyside training scheme, gaining the Fellowship of the Royal College of Radiologists in 1982, and undertaking post-Fellowship training in paediatric radiology at Alder Hey Children's Hospital with Professor Helen Carty. I was appointed as a consultant at Victoria Hospital Blackpool in 1985 and developed over the next several years: children's imaging services, urological radiology (including a full interventional service), and continued development of general and cardiac nuclear medicine. I helped establish the CT service in 1989 and MR in 1993.

From 1988 I have been involved in postgraduate teaching of radiographers at the University of Salford, as lecturer, examiner and course team member.

In 2003 I recognised the developing importance of PETCT and gained experience in the Northern Ireland PET Centre (the second such in the UK), the Catalan PETCT Centre in Barcelona, the SNM PET training Centre in Washington DC and St Thomas' Hospital in London, before establishing a PETCT service in Preston.

I am a regular peer reviewer for two journals; the British Journal of Radiology and BJR Case Reports.