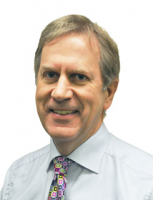 I graduated from the University of Birmingham in 1978 with a First Class Honours Degree in Medicine. Having completed my junior doctor posts in the United Birmingham Hospitals and being awarded the Fellowship of the Royal College of Surgeons (1982), I undertook surgical training at the Royal Free Hospital in London. I was then appointed as Lecturer in Surgery at the University of Leicester during which time I completed my surgical training and under took a period of surgical research, for which I was awarded a Doctorate (MD) by the University of Leicester and in addition, a Hunterian Professorship by the Royal College of Surgeons of England.
I was appointed to the Worcester Royal Infirmary as a Consultant General Surgeon in 1991.

Although still a Consultant General Surgeon as I fully participate in the general surgical emergency commitment of the Worcestershire Royal Hospital, I specialise in colorectal disease and in particular the investigation and treatment of patients by endoscopic (flexible telescope) and laparoscopic (key-hole) techniques.

During my time as consultant surgeon in Worcester I have undertaken a number of service delivery and management roles including Clinical Director for Cancer Services, Clinical Director for Surgery and Endoscopy. I have had a key role in introducing a number of very successful clinical services into Worcestershire including laparoscopic colorectal surgery and enhanced endoscopy techniques such as the national bowel cancer screening programme.

I have been an accredited National Bowel Cancer Programme Screening Colonoscopist and the Clinical Director of the Herefordshire & Worcestershire Programme since 2009.