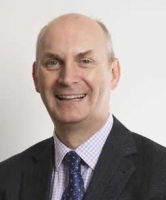 Mr Michael Saunders qualified from University College London in 1993 and was accredited by the Royal College of Surgeons in Edinburgh in 1997. He was later appointed as a Consultant General Surgeon at Barnet Hospital in 2008 moving to Chase Farm in 2010. He is now a Senior Consultant Surgeon at The Royal Free Hospital London.
Mr Saunders believes in the importance of detecting diseases early and feels strongly about overcoming stigmas that often surround aspects of medical care. His sub-specialist interest in laparoscopic surgery has lead to a notable proficiency in laparoscopic surgery for hernia repair and bowel cancer. In addition to this, he has undertaken research in post-operative pain following laparoscopic surgery.
Beyond his strict clinical activity, he is a keen advocate for the use of day surgery and has published many articles on this topic. Owing to his extensive expertise, he is a member of the British Association of Day Surgery and has published widely on this matter.
As a keen medical educator Mr Saunders is the Undergraduate Medical Education Tutor responsible for medical student teaching .
He has been awarded the title of Honorary Clinical Associate Professor at University College London Medical School.