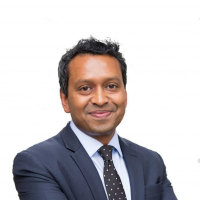 Mr. Romesh Angunawela BM, MD, FRCOphth, FRCS, Cert LRS, is a Consultant Eye Surgeon at Moorfields Eye Hospital NHS Trust where he is a specialist in cornea, cataract, lens, and laser surgery. He sees private patients at Ophthalmic Consultants of London and at Moorfields Private.

Mr Angunawela has been voted as one of the top 10 cataract surgeons in the UK. He is an internationally recognized expert in vision correction surgery including laser eye surgery, cataract, and lens replacement surgery as well as corneal transplantation. Mr Angunawela aims for optimal glasses-free vision during cataract surgery with correction of shortsight, longsight and astigmatism and has extensive experience in the use of premium lens implants including trifocal lenses.

Mr. Angunawela graduated from Southampton University (BM) in 1997 and was awarded the Altounyan Research Prize for research into the prevention of stroke-related brain injury. He completed ophthalmic training at St Thomas' Hospital and Moorfields Eye Hospital in London and received a doctorate (MD) from the University of London for his thesis on corneal wound healing after laser eye surgery. He has published over 50 scientific papers and is the recipient of over 20 national and international awards. He also holds the Certificate in Laser &Refractive Surgery from the Royal College of Ophthalmologists.

With a desire to deliver the best possible technologies to patients, Mr Angunawela joined with several other leading surgeons to form the Ophthalmic Consultants of London surgical clinic in 2018. The clinic is equipped with state-of-the-art technology including femto-laser cataract surgery, Zeiss Callisto intra-operative astigmatism correction and the Schwind Amaris 1050RS excimer laser for vision correction. Mr Angunawela now performs the majority of his surgeries at the OCL clinic including same-day bilateral cataract surgery.

50 publications including the following;

Ophthalmic Consultants of London has a 24 hour telephone answer service