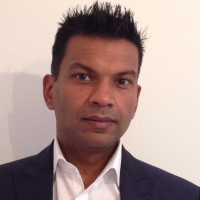 Dr Raj Srirajaskanthan is a Consultant Gastroenterologist at Kings College Hospital NHS Foundation Trust. He is well experienced in all aspects of gastroenterology and hepatology. He graduated from Guy’s, King’s and St. Thomas’ medical school with both a medical degree and intercalated BSc. In 2010 he was awarded an MD (Res) from University College London following breakthrough clinical research into gastrointestinal tumours including neuroendocrine tumours.
He is accomplished in endoscopy and colonoscopy and has attended a number of advanced endoscopy courses. His colonoscopy completion rates are above the national average. In addition he was awarded British Society of Gastroenterology travel fellowship to The Medical University of South Carolina, USA. He performs Bowel cancer screening colonoscopy.

He is currently upper gastrointestinal cancer lead at Kings college hospital. He was recently selected to be a member of the Clinical reference group for hepatobiliary diseases.
He has a sub-specialist interest in neuroendocrine tumours and works as clinical lead for neuroendocrine tumours at ENETS Centre of Excellence, Kings College Hospital.

His interests are in luminal gastroenterology with major clinical interest in dyspepsia, gastro-oesophageal reflux disease, altered bowel habit and irritable bowel syndrome. Following his extensive training in hepatology at both liver transplant centres in London (Royal Free Hospital and Kings College Hospital).
He undertook research at Royal Free Hospital and University College London. He is still actively involved in research and is vastly published in a number of journals. He presents at both national and international meetings having won multiple awards, prizes and travel grants for outstanding work.
He has written and edited three textbooks, on liver disease and neuroendocrine tumours. He has co-authored book chapters for 8 other books, developed teaching modules and online educational articles.