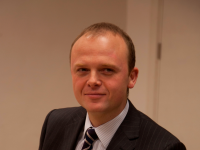 Jon Hardman is the Lead Consultant Colorectal Surgeon at Mid Cheshire NHS Foundation Trust.
He is a specialist in Laparoscopic General and Colorectal Surgery, including treating bowel cancer.
Jon has an interest in laparoscopic and other ‘minimally invasive’ surgical treatments for a wide range of disorders involving the gastrointestinal tract, in particular those affecting the colon,rectum and anus, including haemorrhoids and other causes of rectal bleeding.
He graduated from the University of Manchester in 1996 and continued his surgical training in the North West of England, becoming a Fellow of the Royal College of Surgeons of England in 2007. In addition, Jon has an interest in research and training, having presented his research at international meetings and was awarded a Doctorate of Medicine (MD) from the University of Manchester in 2010. He has also undertaken a prestigious National Fellowship in Laparoscopic Colorectal Surgery.