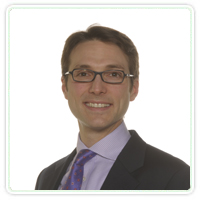 Dr Uprichard is a consultant haematologist with an interest in haemostasis, including inherited and acquired bleeding disorders, thrombosis and haemostatic disorders of pregnancy. St George's Hospital is a major trauma centre, meaning much of his work involves the acquired coagulopathy of trauma.
He is the lead clinician for blood transfusion and the management of patients who refuse blood transfusions.
He has an interest in peri-operative haemostasis management including anticoagulation.

Professional profile
Dr Uprichard graduated in medicine from University College London in 1996. Subsequently he completed senior house officer posts at Hammersmith, the Royal Free and University College Hospitals.
He then completed a PhD thesis in rare bleeding disorders before commencing registrar training in haematology in the North West Thames region.
Dr Uprichard was appointed a clinical lecturer in haemostasis at Imperial College in 2007, during which time his research included the use of global tests of coagulation in pregnancy and in anticoagulation.
After CCT he completed a clinical fellowship in the North Thames Haemophilia Network and an elective in haemostasis at the National Institutes of Health in Bethesda, USA. He was appointed as consultant haemotologist at St George's Healthcare and honorary senior lecturer at St Georges, University of London in 2011.

Author and co-author of over 20 publications and book chapters