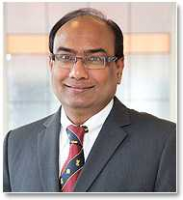 Mr Loganathan completed basic medical training at Coimbatore Medical College in South India in 1989. He had general surgical training at Madras Medical College in South India from 1989 to 1993 (MS- General Surgery).
Mr Loganathan had further training in general surgery, emergency surgery and colorectal surgery in the U.K from 1996 to 2008, and was appointed as a consultant in 2009. His special interest areas include bowel cancer surgery and emergency surgery

Royal College of Surgeons of Edinburgh
Association of Coloproctology