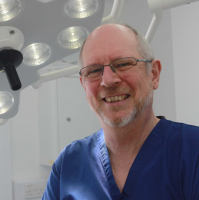 David Dunaway graduated from the University of Manchester in 1989 and became a Fellow of the Royal College of Surgeons in 1992. He undertook his Higher Surgical Training in Plastic Surgery in Leeds, Newcastle, London and at the Australian Craniofacial Unit in Adelaide. He is also a qualified Dentist and is a Fellow Dental Surgeon of the Royal College of Surgeons.
In 1997 he was appointed Consultant Plastic Surgeon at Canniesburn Hospital in Scotland specialising in Facial Deformity and Head and Neck surgery.
In July of 2000 he joined the Plastic Surgery and Craniofacial Unit at Great Ormond Street Hospital for Children where he now leads the Craniofacial Service. He is a member of the Adult Craniofacial Service based at University College London Hospital and the Eastman Dental Hospital.
He recognised as a world leader in craniofacial distraction and the treatment of craniosynostosis and frequently lectures internationally on these subjects. He regularly undertakes craniofacial distraction surgery at several European centres and has helped the national craniofacial units of Ireland, Finland and the Netherlands establish innovative craniofacial distraction techniques. He has an interest in the separation of craniopagus twins and led the team that successfully separated the Sudanese twins at Great Ormond Street in 2012.
David is Professor of Craniofacial surgery at the UCL Institute of Child Health where his research interests include the study of congenital facial deformity, craniosynostosis, craniofacial morphometrics and craniofacial distraction devices. In 2014 he was awarded a Hunterian Professorship by the Royal College of Surgeons for his surgical research. He holds several visiting professorships internationally.
In his private practise, he undertakes facial cosmetic surgery, facial reconstruction, craniofacial surgery, children’s plastic surgery and the treatment of scars.
He is a past president of the plastic surgery section of the Royal Society of Medicine, Secretary General of the European Society of Craniofacial Surgeons and an honorary life member of the Australian Society of Plastic Surgeons.
David Dunaway is actively involved in working and teaching in Africa and is a Trustee of Facing Africa, a British charity treating children from developing world countries with Craniofacial Deformity.
In 2016 David received a CBE in the Queen’s Birthday Honours list for services to facial surgery. He is named in the Times Top 50 Surgeons list, Times top Children’s doctors list and by the Tattler as a leading cosmetic surgeon for facelifts.

167 publications in per reviewed journals