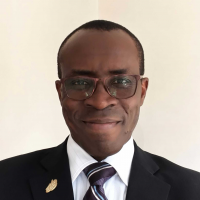 Mr Orakwue qualified from the College of Medicine of the University of Lagos in 1991, and completed his early years of training at the Lagos University Teaching Hospital (Nigeria) and also hospitals in the West Midlands and London including Birmingham Women’s Hospital, City Hospital in Birmingham and Royal Free Hospital in London.

He achieved the Fellowship of West African College of Surgeons (FWACS) and subsequently the MRCOG in 2003. He is a Fellow of the Higher Education Academy (UK) and was a Clinical Lecturer in Medical Education at the University of Dundee 2008-2009. He works as a Consultant at the Royal Wolverhampton NHS Trust.

In addition to skills from his general gynaecological training, his main areas of interest are keyhole (laparoscopic) operations for conditions like ovarian cyst, endometriosis, pelvic adhesions and pelvic pain; treatment of heavy and painful periods including removal of polyps and fibroids from the womb and also treats women with abnormal vaginal bleeding, abnormal cervical smears, endometriosis and adenomyosis.

He is focussed on care which aims to achieve the best possible experience and outcome for the patients.

Fellow of the Higher Education Academy