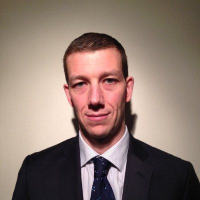 Dr McLaughlin trained in Medicine at Guy’s, King’s and St. Thomas’ Medical Schools, qualifying in 2000. During his postgraduate training he undertook two and half years of clinical research into the causes and treatment of inflammatory bowel disease at St. Mark’s and St. Thomas’ Hospitals London. He is a recognised National expert in the investigation and treatment of ileo-anal pouch dysfunction especially pouchitis. For his research he was awarded an MD from Imperial College London in 2010.

Dr McLaughlin has undertaken additional specialist training in video-capsule endoscopy at St. Thomas’ Hospital London and leads the video-capsule service at both the Royal Bournemouth Hospital and Bournemouth Nuffield Hospital. He is clinical lead for gastroenterology research at The Royal Bournemouth Hospital and is the principal investigator for a number of trials of new treatments for inflammatory bowel disease. Dr McLaughlin has published four book chapters on inflammatory bowel disease and has written more than 20 full papers, he authored the 2010 British Society of Gastroenterology Coeliac Disease guidelines.
His practice includes all aspects of luminal gastroenterology with a particular interest in inflammatory bowel disease (Crohn’s disease, ulcerative colitis and patients who have undergone ileal-anal pouch surgery) irritable bowel syndrome and coeliac disease. His endoscopic interests include small bowel video capsule endoscopy, enteroscopy as well as gastroscopy and colonoscopy. He leads the complex colonoscopy service at the Royal Bournemouth Hospital (Removing the larger more complex polyps and performing other procedures including dilating strictures).

Dr McLaughlin strongly believes in a multidisciplinary team approach to patient care. He works closely with a senior dietitian and gastroenterology psychologist as well as consultant surgeons to provide holistic care in his private practice.