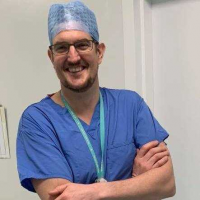 Mr Craig White is a Consultant Trauma and Orthopaedic Surgeon at BMI Woodlands Hospital with a practice in hip and knee surgery. He has an interest in young adults with hip pain due to early arthritis or injury. He performs hip arthroscopy (keyhole surgery) and hip impingement surgery using both open and arthroscopic techniques, realignment surgery and joint replacement of the hip and knee.
Mr White has a busy practice in the management of fractures, both surgically and non-surgically. He trained as a doctor at King’s College Hospital (University of London), gaining his MBBS in 1998.
He went on to undertake early surgical training in London and the South East and gained his membership of the Royal College of Surgeons in 2001. He was appointed to the West Midlands training program based out of the Royal Orthopaedic Hospital, The University Hospital of Coventry and Warwickshire and the University of Warwick. He also undertook senior training posts in hip, knee and trauma training.
During this time he was also the President of the national trainees organisation for orthopaedics, serving on the Council of the Royal College of Surgeons in London and Edinburgh as well as the British Orthopaedic Association. He undertook further fellowship training in Ottawa, Canada, in the management of young hip and knee disorders, including hip arthroscopy and osteotomies (realigment), as well as reconstruction of the failing hip replacement. He was awarded a fellowship by the Univesity of Ottawa.
In addition, he is also an Honorary Lecturer at the Faculty of Health Studies, Teesside University. He has presented research papers at various national and international meetings.

Mr White has ongoing active research interests in Trauma especially around blood loss in surgery and in the treatment of young adult Hip disorders.

Mr White is a keen cyclist and Triathlete. He also enjoys skiing and sailing when time permits.