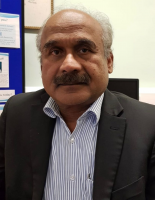 Mr Harrison Benziger is a substantive General, Laparoscopic Colorectal Surgeon based at QEQM Hospital Margate Kent. He also practices at Spencer Private Hospital in Margate and Chaucer Hospital in Canterbury.
He qualified from the Trivandrum University Medical College in Kerala, India in 1974. He moved to the UK to pursue and obtain higher surgical training. His early surgical training was in South East England and South Wales.
He has obtained FRCS (Edin) from the Royal College of Surgeons in Edinburgh and FRCS (Eng) from Royal College of Surgeons England.
Following completion of his training in South Wales Mr Benziger was appointed as Locum Consultant Surgeon in 1983 at Haverford West Hospital in South Wales. Mr Benziger was then offered the post of Consultant and Head of the Department of Surgery at the Ministry of Health Hospital in Riyadh, Saudi Arabia, where he served for 13 years. He was given the task to establish the new surgical department up to the standards of NHS in UK. His efforts were appreciated and recognised by the Ministry of Health and his contract which was initially for 5 years was extended until he decided to come back to UK for the purpose of his children educational needs.
On his return to the UK he initially worked as a Locum Consultant Surgeon at Bangor General Hospital in Wales and at the Homerton General Hospital in London and East Kent Hospitals NHS Trust.
He was then appointed to substantive Consultant General and Laparoscopic Colorectal Surgeon in the East Kent Hospitals NHS Trust.
During his surgical training Mr Benziger was trained in advanced and sophisticated gastrointestinal operations with open and Laparoscopic technique. He was one of the early surgeons to embrace Laparoscopic technique to its full extent. He has applied his skills in mastering complicated laparoscopic procedures for colonic cancer including en-bloc resections for locally advanced disease. His special interest in the management of rectal cancer surgery led him to master the technique of Laparoscopic Extra-levator Abdomino-perineal resections of rectum combined with deep pelvic colorectal resections to achieve clear margins for low rectal cancers. He was pioneer in bringing this technique to East Kent. He also performs surgery for inflammatory bowel disease as well as Laparoscopic benign Upper GI surgery, including gastro-duodenal operations, splenectomy as well as Laparoscopic gallbladder surgery.
He also performs operations for rectal prolapse, haemorrhoidal disease, anal fistula and anal fissure.
His General Surgery practice includes open and laparoscopic repair of inguinal, complex incisional hernias, femoral, umbilical and spigelian hernias.
He has amassed a vast experience in a wide range of both elective and emergency surgery with excellent results.

Either Spencer Private Hospitals or The Chaucer Hospital - Ward, or local A&E if very urgent.