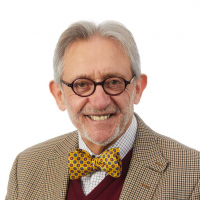 Dr Richard Ashford trained at Downing College, Cambridge, where he was a scholar and took first class honours, and then at St Thomas’ Hospital. After training in internal medicine, Dr Ashford undertook his oncology training at The Westminster Hospital. During this time he published many papers including techniques of iridium implantation in breast cancer. Subsequently he took up the post of Clinical Oncologist at Mount Vernon where he worked for the 30 years until leaving the NHS in December 2012. During this time Dr Ashford contributed to many clinical studies in the management of breast cancer in both the adjuvant and metastatic setting.

As a Consultant he pioneered the multi-disciplinary team approach, setting up joint clinics in breast cancer, gastro-enterology, urology & haematology, before specialising in breast cancer. In 1989 he was a founder member of the breast unit in Windsor, where he was instrumental in setting up one of the first one-stop breast clinics in the UK. In 2005 he became the unit’s Clinical Director relinquishing this post in 2012 just prior to leaving the NHS.

Dr Ashford has established a large practice specialising in breast cancer. He is a strong believer in clinically based practice within a multi-disciplinary team setting.